Before moving to this version of Android lets have some overview of Android Operating System and some of its versions.

Android is an Operating System for Mobile developed by Google and the Open Handset Alliance. Many versions of Android Operating System have been released. They are in alphabetical order and related to treats : 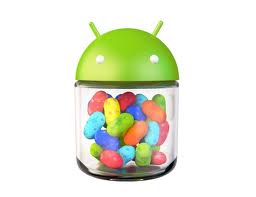 Android Version 4.1 ‘Jelly Bean’  is an improvement over earlier versions of Android.  Android 4.1 Jelly Bean has improved in performance and has many new features.

Jelly Bean will be available firstly in the Galaxy Nexus, Nexus S and Motorola Xoom in mid-July 2012.

One of the new features added to Android Jelly Bean is Google Now.  It is an Improvement in Google Search that gives you search result considering user’s location,  activities, interests, habits and other relevant information.

For example, a user is at new city, and facing Medical emergency and want to go to nearest Hospital, Google Now feature gives you appropriate information automatically. In the case of this example, it displays roads to the nearest hospital , and can also notify about traffic on the roads. Thus, it shows different routes, Hospital Information and traffic as well.

Google Now is the smartest feature and enhancement to  Google Search. You can use Voice Typing for asking questions and get the results.

The Name which we are hearing with Android Jelly Bean is Project Butter.

Smoothness, Responsiveness and fluid are now butter smooth in Android Jelly Bean so name of this feature is “Project Butter” .

CPU, GPU and display are the main components used to display anything on screen and Triple Buffering makes it possible to work together for smooth animation and more consistent rendering.

With this feature user can delete unwanted images by swiping them off the screen and can also undo the deletion and can get images back. Jelly Bean camera app provides best quality of camera and an innovative way to swipe between photo gallery and camera to make things simple and smooth while taking pics.

Android Jelly Bean also provides you smarter keyboard with extended dictionary and many more.They have support for Hindi and 18 more languages as an input.

Android Jelly Bean provides new widgets to home screen and new way to view notifications instead of  following several steps. Here it gives you Notification bar that can be expanded and collapsed with a click.

Say for example, there are some new mails in your inbox and notification bar expansion will show you a portion of your mail inbox rather than just simple information like you have new mail in your inbox.

Android Ice Cream Sandwich also shares data through NFC but it has limited ability but Android Jelly Bean do sharing between two devices from NFC to Bluetooth.

This feature makes sharing or transfer very smooth and easily between two devices, it allows sharing by tapping two devices together.

With Android Beam, Now NFC can connect other devices in wireless connection to tap a bluetooth device and your phone and can share anything.

Say For Example, User want to send a pic from Galaxy Nexus to  Nexus 7 tablet, user will load the pic up on the  Galaxy Nexus and touch it to the rear of the tablet.

Smooth like silk,  delightful and faster in performance, Quickest Responder ,  Android 4.1 Jelly Bean contains above described features as well as having features like  Gesture Mode for better Accessibility ,  Knowledge Graph for Search, and Google Cloud Messaging and many more.

This is a little effort to make you aware of Android 4.1 Jelly Bean…Hope U Like it 🙂