Linus Benedict Torvalds is the creator of Linux kernel. He is Finnish American by origin and is a software engineer. He was born on December 28, 1969. He was the major driving force behind the development of Linux kernel which became a widely held kernel for operating system. Later, he took responsibility as the chief architect and today he acts as the project’s coordinator of the Linux Kernel.

Awards given to Linus Torvalds

He is also known for his creation of GIT which is a distributed revision control system. In 2012, The Technology Academy, Finland awarded him with Millennium Technology Prize to recognize his “creation of a new open source operating system for computers leading to the widely used Linux kernel”.

He has also received the IEEE Computer Society Computer Pioneer Award in 2014.

Born in Helsinki, Finland to Nils and Anna Torvalds-both radicals in the University of Helsinki , he has revolutionized computing. In 1987, Linus bought his first computer, Sinclair QL a 32-bit computer which had the configuration as 7.5MHz (megahertz) Motorola 68008 processor, 128KB RAM. When he realized that its operating system could not be reprogrammed because its operating system resided in ROM, Linus became disappointed. In 1988, he got enrolled in the University of Helsinki which is a famous education institute in Finland. He majored in computer science and took his first class in C in 1990. This was the language he would soon be writing Linux kernel in.

He again bought a computer in 1991, this time an IBM-compatible personal computer with a configuration far better than his previous computer: 33MHz Intel 386 processor and a huge 4MB of memory. This time the MS-DOS operating system that came with the computer disappointed him as the OS could not take the huge improvements of 386 chip. Therefore, he preferred to choose UNIX operating system which he used in his university. He tried to obtain a UINIX version for his new computer but even the basic system’s cost was as high as US$5,000. As an alternative, he chose to use MINIX which was UNIX’s small clone. Though when compared to MS-DOS, MINIX was much more powerful and it was designed to run on Intel x86 processors, MINIX had its own cons. Its source code was not made public and hence no one could study or improve the software. Also MINIX lacked some important features of UNIX and had a significant licensing fee. 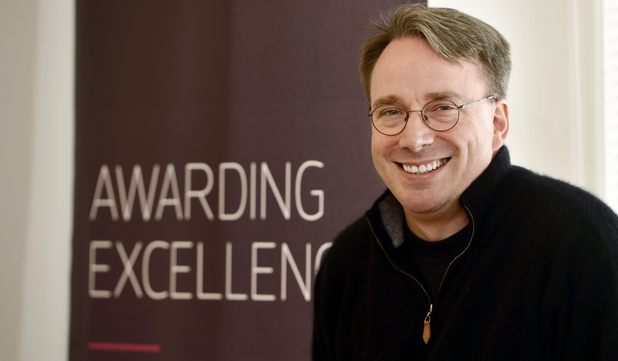 Getting frustrated on the fact that the source code for MINIX was unavailable, Torvalds decided to create his own operating system based on both MINIX and UNIX.

On August 25, 1991, he announced about his initial creation on comp.os.minix asking for people to comment about what features they like in MINIX and what things frustrate them. On September 17, 1991 he was successful in creating a crude version (0.01) of his new operating system. First official version (0.02) of his new operating system was announce in October 5 of the same year. It was able to run on bash shell and GCC. Originally Linus gave his operating system the name Linux (from Linus’ MINIX) but later on changed it to Freax (denoting free, freak and X for MINIX-like). However, his friend Ari Lemmke while uploading it to his FTP created the directory with the name linux and thus the operating system is known as Linux. Torvalds decided to release Linux under GPL (GNU General Public License) which is a popular free license. As the license was free, programmers began helping Torvalds in his work and hence the performance increased rapidly.

Today, only about 2% of the whole Linux kernel has been written by Torvalds as the size and complexity has increased over the years. The final decisions regarding the incorporation of modifications and additions to the linux kernel are taken by Torvalds himself.

Binoy Wilson Started his career as a java developer in one of the reputed companies in Ahmedabad (Gujarat,India). He soon moved on to .net technology by Microsoft and is lucky enough to manage a small team of 7 members.
View all posts by Binoy Wilson(admin) →
« Marc Andreessen | Cofounder of Mosaic and Netscape
How to stop videos from auto-playing in Facebook »