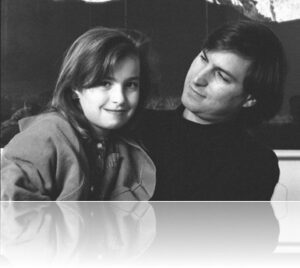 Steve Jobs was an American businessman and will be remembered forever as a legendary technological icon, innovator and a true genius. He died last October and because of his brilliant innovative gadgets, we are remembering him, we all know more about his family, wife, children, sisters, parents but what about his ex-girlfriend Chrisann Brennan who also happens to be his daughter Lisa Brennan Job’s mother.

Lisa Nicole Brennan-Jobs (born May 17, 1978) is an American journalist and magazine writer. She is graduated from Harvard’s school of journalism in 2000. Her writings have been published in The Southwest Review, The Massachusetts Review, Harvard Crimson, Harvard advocate, Los-Angeles times, The Harvard Advocate, Spiked, Vogue and The Oprah Magazine.

However, when Lisa Jobs was born, it took two years before Jobs would acknowledge that Lisa was his child, going so far as to swear in a court document that he was “sterile and infertile, and as a result thereof, did not have the physical capacity to procreate a child.” , he was already rich and Strangely Steve Jobs has just release the Apple LISA on his daughter’s name “LISA”
Chrisann had to raise Lisa on welfare, but Lisa Brennan and her father reconnected on 1986, it was strange as first but things got easier and she would go on vacations with him, got to know him even moved in with him. Steve Jobs paid for Lisa’s college studies in Harvard

“In California, my mother had raised me mostly alone. We didn’t have many things, but she is warm and we were happy. We moved a lot. We rented. My father was rich and renowned and later, as I got to know him, went on vacations with him, and then lived with him for a few years, I saw another, more glamorous world. The two sides didn’t mix, and I missed one when I had the other,” Lisa wrote in her story “Tuscan Holiday” in Vogue Magazine.

Lisa went living with her father on 1991 or 1992 around the same time she was in Harvard it is believe he encourage her to be a writer taking her aunt novelist Mona Simpson, Steve’s biological sister. Brennan graduated on 2000 she later relocated in Europe

Having a complicated upbringing and now living in New York as a professional writer.
“In my life,” she wrote in her blog last fall, “I am between landmarks: after childhood, before a book, before marriage and children, all potential.”
In her essay Driving Jane, Lisa recounted seeing her personal history described in great detail.

Steve Jobs daughter Lisa Nicole Brennan-Jobs has been a wonderful personality as a Writer and a Journalist, although had many faces of life in the past, Lisa is now living happily as ever.

A Revolutionary writer dreaming to bring a massive change in the society with enlightenment of knowledge and wisdom
View all posts by aniketectech →
« Phishing by Link Manipulation : How safe are our links ?? | Link Manipulation : A type of phishing attack
Phone Phishing : The latest phishing »