Some people truly have the fire in them, fire to do something new; and that changes the way future generations function. A generation back when any geek wanted to learn programming the first step towards learning programming was to learn Turbo Pascal and than slowly we got multiple languages and platforms but not to forget – Turbo Pascal was the revolution in itself and all modern languages drew inferences from working of Pascal. The man behind Pascal and some other commercially successful programming languages is none other than Anders Hejlsberg.

Who is Anders Hejlsberg?

Anders is a software engineer born in December 1960 in Denmark. He authored Turbo Pascal, and he is the man behind .net framework (from Microsoft which for any modern programmer Is a boon type framework ). He is the man behind C# programming language and also has to his credit the development of Delphi and DLS Pascal. He is considered to be one of the few super heroes of I.T Industry.

Anders attended Technical University of Denmark in Lyngby for pursuing Engineering but he could not complete it. It was around 1980 when Anders was in University, he wrote some programs for Nascom microcomputer and also wrote Pascal Compiler being marketed at that time as Blue Label Software Pascal for the Nascom-2. He then re-wrote the compiler again for CP/M and DOS, and marketed it initially as Compas Pascal and later as PolyPascal.

After some time the compiler was licensed to Borland, which was integrated into an IDE which together was known as Turbo Pascal system.
Anders also ran a company named PolyData with his partners; the company Distributed Microsoft products in Denmark.

In 1989 their company faced severe economic stress and hence Anders moved to California and became Chief Engineer at Borland, there Anders developed Delphi which was a substitute of Turbo Pascal.

Anders joined Microsoft in 1996 where he performed the roles of Microsoft Distinguished Engineer and Technical Fellow. Anders developed J++ programming language for Microsoft and Windows Foundation Classes. Since then he is working for the development and enhancement if C# language; whose trend in market is increasing day by day in I.T Industry. 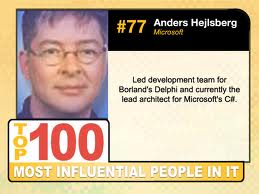 Anders has been winning many awards and recognition since long, to name a few are 2001 Dr. Dobb’s Excellence in Programming Award for his work on Turbo Pascal, Delphi, C# and the Microsoft .NET Framework and Technical Recognition Award for Outstanding Technical Achievement for their work on the C# language.

Anders has been writing quiet a few books for students of I.T industry and professionals alike.
His prime book is – The C# Programming Language, for Addison-Wesley Professional which launched 3 editions in 2006, 2008 and 2010.

A simple man, An intelligent Engineer, A Sharp System Architect , A Visionary and a real super hero : Is that all we can call a person like Anders who has given in leaps and bounds to the I.T Industry, not only he has served I.T industry but his contributions are used as a tool to generate softwares which have been helping other industries as well.

We humbly respect you Sir Anders Hejlsberg, may you be blessed with a long healthy life.