Creativity & Imagination know no boundaries!
Yes, that is what is believed and proved by Mr.Pranav Mistry –  who is known for inventing SixthSense which is a wearable device that enables new interactions between the real world and digital world.

Who is Pranav Mistry ? 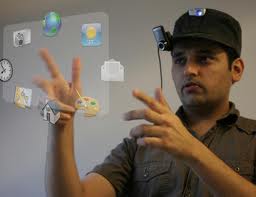 Pranav Mistry is a Ph.D student at MIT’s Media Lab in Fluid Interfaces Group, he is the inventor of Sixthsense and speaker at TED.

Here is a very famous talk delivered by Pranav  :

Pranav Mistry was earlier associated with Microsoft as an UX Researcher. Later he has joined MIT Media Lab as research associate. He also demonstrates several innovations at TED India Conferences. 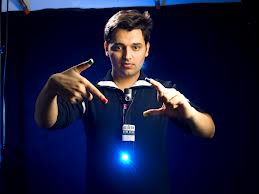 Mouseless  which is an invisible computer mouse.
SPARSH which is a novel way to copy-paste data amongst digital devices.
Quickies which are intelligent sticky notes that can be searched, located and which can send reminders and messages to your cellular device.
Blinkbo & More.
However he is best known for his SixthSense Technology by which he aims to combine Digital & Real world. Some of the examples of which are to click photographs using only hand gesture or playing games on a piece of paper, to watching live videos on a topic from newspaper and more.

He has won many awards , to name a few are :

Pranav was also nominated for Forbes India’s Person of the Year 2009.

He is a calm, simple & humble man, who speaks with ease. His vision has great potential which can be used by various defense & security units also which can be beneficial to the country.
He is an Indian who has added to the innovations from the Indian Soil. A young dynamic personality with sharp brains.

He is 31, studying, researching and working. Many more innovations can be expected from this intelligent man in future.

We wish him all scale success in all his future endeavors.
Warm Regards,
Deep Bajaj