Steve Jobs as a boss: An employees worst nightmare 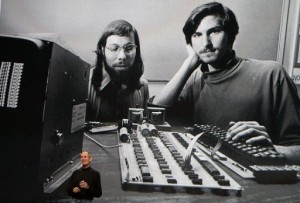 Steve Jobs was one of the geniuses of his time. He changed the way people communicate by his “i” serieses. ipod, iphone, ipad are only few examples of his success story. He created such products that inspired other companies to copy such products.

Even if ideas of such products were of steve Jobs, he wanted many workers to work on that ideas and to made that dream become reality. So, with out his coworkers Jobs was just a paralysed person with only active brain. Even though Steve’s workers were his main lifesupport, he treated them like there existance never mattered. That’s the one thing that made him very bad boss in eyes on his workers.

Following are few lines his workers told about Steve Jobs at various interviews;

“He’s not warm and funny … He was not the world’s greatest manager. In fact, he could have been one of the world’s worst managers.”

“He was very petulant. He was very brittle. He could be very, very mean to people at times.”

“Whether it was to a waitress in a restaurant or to a guy who had stayed up all night coding, he could just really just go at them and say, ‘You’re doing this all wrong. It’s horrible.”

Job’s quest for perfection came in part from his adopted father, Paul Jobs, who taught him “how to make great things”

Followings are some worst incidents of his with his workers;

1)When Steve had to make cutbacks at Pixar, He fired people and didn’t give any severance pay. Pamela Kerwin, an early Pixar employee, Pleaded that employees at least be given two weeks notice.
“Okay,” he said, “but the notice is retroactive from two weeks ago.”

2)Jobs interviewing a job candidate “How old were you when you
lost your virginity?” he asked.
The candidate looked baffled.
“What did you say?” “Are you a
virgin?” Jobs asked. The
candidate sat there flustered, so
Jobs changed the subject. “How
many times have you taken
LSD?”

3)When MobileMe launched in the summer of 2008, it was plagued with problems. People had trouble getting their data to sync to the cloud and across their devices.
Jobs then fired the MobileMe boss on the spot and replaced him with Eddie Cue.

4)When Apple was about to reveal the “Bondi Blue” iMac, he berated his good friend and ad partner Lee Clow over the phone. Jobs said Clow’s team was getting the color wrong for the print ads. He shouted, “You guys don’t know what you’re doing. I’m going to get someone else to do the ads.”

These were few things that leads him to the greatest path of success.