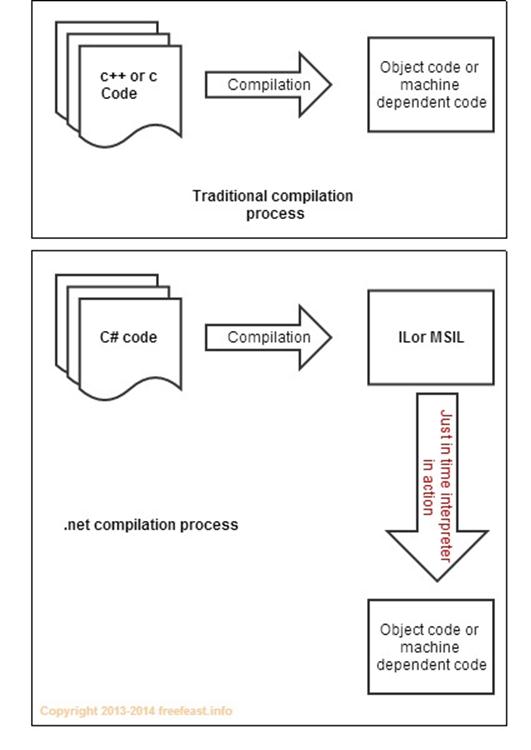 Before we go to understand MSIL I would like to explain how the traditional compilation process actually works. In Old languages like C and C++, the conversion of the source codes to the executable version just a one stage process.

As the community of coders increased it was found that coders had started making preference in the language that they would like to code in. Some liked to code in C++, others in Java and many other such languages.

There was a major problem faced by developers when more than two developers with different language preferences had to work on the same project. It really happens.

So there was a need of something like platform or language independent which does not have concern with the platform. It means write your code once in any language C# , F# , VB  or any other  and it can run on different  environment.

The same thing is provided in .NET i.e. compiler translates the source code in MSIL :

To execute MSIL code, this code has been sent to CLR and converted into native code (CPU executable code) using Just In Time (JIT) compiler.

Binoy Wilson Started his career as a java developer in one of the reputed companies in Ahmedabad (Gujarat,India). He soon moved on to .net technology by Microsoft and is lucky enough to manage a small team of 7 members.
View all posts by Binoy Wilson(admin) →
« Satya Nadella | Life of Satya Nadella | CEO OF Microsoft
Difference between REST and SOAP | REST vs. SOAP »