We are familiar with the term robot. But in technical terms it is an autonomous or semi-autonomous body that has been controlled by computer programs and are actually virtual artificial agent that are similar to an electro magnetic machine. The designing, programming, information processing, implementation, operation, controlling and getting sensory feedback from  robots falls under the department of Robotics. With the advancement of technology the scientists are focussing much on robotics and how they can be utilised in science, technology, Space and even in day to day life. 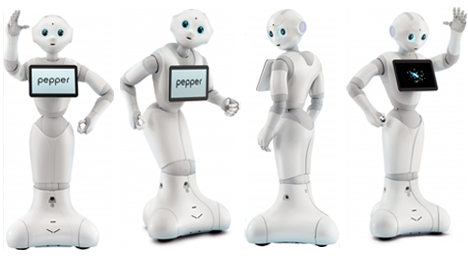 The back picture of emotional robot

Pepper is a robot capable of reading human emotions designed by Alderman Robotics which is a French firm and a subsidiary of SoftBank Mobile. The humanoid robot was first introduced on 5th June 2014 in a conference in Japan. It has been displayed to the people since 6th June 2014. Pepper can analyze expressions as well as voice tones which it the reason why the robot can display emotion.

The robot is four feet tall and it weighs 61 pounds. It is a robot designed to make people feel happy and to connect them to the world. It has fun with people and enhances relationships between them. The base price of the robot was kept at JPY 198,000 i.e. $1,931 excluding data and insurance charges. Pepper can understand up to 80% of the conversations.

Pepper is equipped with lithium-ion battery which lasts for around 12 to 14 hours. It has a cute face and a screen fitted on its chest. It can analyze people’s body language and words with the help of its sensors. There are four microphones on its head, 1 HD camera in the mouth and another HD camera on its forehead. A 3-D depth sensor is placed behind its eyes. A gyroscope is fitted in the torso and there are touch sensors placed in its head and hands. Two sonars, three bumper sensors, six lasers and a gyro are fitted in the mobile base. It has the capability to run the current content in NAO’s app store, NAO being another robot designed by Alderman.

Following are some specifications of this new emotional robot:

In December 2014, Nescafe had employed 1,000 Pepper robots to help those customers who look for a Nespresso coffee machine at home appliance stored in Japan. Pepper will be able to strike a conversation with customers and explain to them about Nescafe products. Softbank store has also hired Pepper robots for the post of shop assistants. Currently, the robot has the capability to speak English, French, Japanese and Spanish. In the coming time, more languages can be added to increase the capability. Even as of now the app store has around 200 apps.SoftBank made an announcement of a new partnership with Foxconn, Apple manufacturer and Alibaba, the Chinese e-commerce big name, prior to the initial release of Pepper. Each of the partners had agreed to invest 14.5 Yen (over $118 million) for holding 20 percent shares in SoftBank Robotics Holding. Softbank is expecting profit from the sales of Pepper after four years.