Stack is one of the Linear data structure (Non-primitive data structure).  In stack, Insert Operation & delete Operation are performed at one end i.e. on the top of the stack.

Stack is the linear data structure having collection of elements which follows LIFO (Last In First Out) pattern i.e. element which comes last is served first. 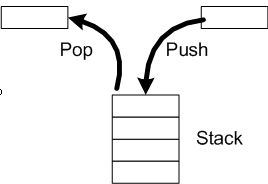 One of the best applications where stack can be viewed is, Shipment in Cargo. For the shipment of goods, they have to be loaded into a cargo. While for unloading they are unloaded  in opposite sequence of  loading. That is, the last goods loaded should be unloaded first.

Let us see Pseudo code or Algorithm of each stack operation.